Skip this paragraph if all you care about is knowing how to find the swing. I will get to that, it’s the point of this post.. but it’s been so long since I’ve written on here that I feel like I need to do a little catch-up.

My last post on this blog was on August 3rd of 2017. A lot has happened since then, which I will catch up on later this week (I intend to focus more on this blog, as it was such a positive outlet for me last year) – with one thing being that I started documenting my adventures in nature on Instagram. My account is the same as this blog – @anxietyandadventures (click here for a direct link), and I’ll be connecting the two as a way to share my explorations with others, write openly and passionately about the topic of mental health, and channel my creativity into something. I’m excited about this online adventure I’m embarking on.

Ok, enough updates (for now- that’s another post) – you want to know how to find that damn swing, right?

We arrived in Malibu on a nice, foggy Sunday morning. We really had no plan for the day – we wanted to check out a beach or two, and find this swing. I had seen images of it on Instagram, and with nothing more than knowing it was in Malibu, I thought I could just wing it and find it day-of. So that’s exactly what I did!

I reached out to one of the Instagram users who had posted a picture of the swing. It was actually the first image I had seen of the swing – I thought it was such a cool spot, right on the cliff overlooking Malibu and the ocean with a view that went on for miles. I had found more images of it by looking up #secretswing on Instagram, and looking online for it via Google and Yelp. Nothing gave me a very distinct location though.

After the Instagram user got back to me, he let me know that to get to the swing, you have to gain entry onto the grounds of a religious retreat called the Serra Retreat. Still not entirely sure what it is tbh (it seemed like a recovery center of some sort? I believe it was a Christian retreat, but again I’m not really sure). To get onto the grounds, there is a guarded gate you must get through. This swing is obviously way up in the hills, so there aren’t many (if any- I’m not aware of other access points) other routes you can take. We turned onto the road for the retreat, and upon seeing it was guarded, had to think on our feet. We spotted an “Open House” advertisement on the road and when we pulled up to the guard, asked about getting to the open house, and he let us right in.

Once we were in, we drove up to the retreat that we thought the swing was at. Plot twist, saying it was on the ground of the retreat was a stretch – it was way farther down a tiny, windy road. Not knowing this, I contacted the Instagram user again, asking if he had coordinates or any more specific instruction, letting him know I was at the retreat actively trying to find the place. It took him so long to reply that we had almost given up. He told us that it was at the top of SweetWater Mesa Dr, so we drove up there (side note: this road gets kinda sketchy at the top, and you really feel like you’re in the middle of nowhere), parked (there aren’t houses or anything at the top of the road, it’s all undeveloped land and cliffs), and started wandering around. We actually left and started driving down the long, winding road at one point, defeated and ready to leave. However, we both felt we were too close to finding this damn swing to give up, so we went back up one more time (thank god for having a Jeep).

We went to the end of the road again, parked, and kept wandering. Eventually we went down the right hill (you can’t see the swing from the top, you have to walk down the hills some to even view it) and saw the swing in all its glory. How relieved, accomplished, and happy we were!

We had the place all to ourselves, enjoyed swinging, snapping awesome photos, and soaking in the incredible view. Seriously, one of the best views I’ve personally experienced. 10/10 would recommend going here. 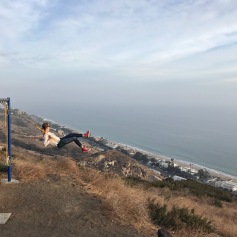 I wish anyone reading this post luck in finding this beautiful, serene, and secret spot! I hope you enjoyed this post, happy adventuring!